This coastal lagoon and Atlantic seashore park reminded me of home, even though it’s about 10,000 miles from home (the West Coast that is). It seemed to me like a typical park we might have in the U.S. where you could rent a kayak or go swimming in the ocean.

Colorful kayaks are lined up for rent beside the saltwater marsh.

The lifeguard stand and waterfront are deserted because it is not yet summer. The view of a distant cape is one that you always see in South Africa with its curving coastline and mountains meeting the sea.

This reserve on the shore of the Western Cape, South Africa, features a colony of wild African penguins.  These penguins are found in the waters off southern Africa and nest in colonies scattered along the coast.  They are an endangered species, having been severely impacted by factors such as oil spills, the sale of their eggs as a delicacy, the use of their guano (which they need to make burrows) as fertilizer, and commercial trade in sardines and anchovies on which they feed.

What do you think they are talking about?

Penguins perch on the rocks lining the shore…..maybe thinking of a dive between crashing waves.

Penguins shelter from the winds that blow spindrift off cresting waves.

Rocks, constantly battered by the sea, are defining features on this Atlantic shore.

An abandoned seaside tower, a remnant of an old whaling station, serves as a sentinel for a colony of cormorants. 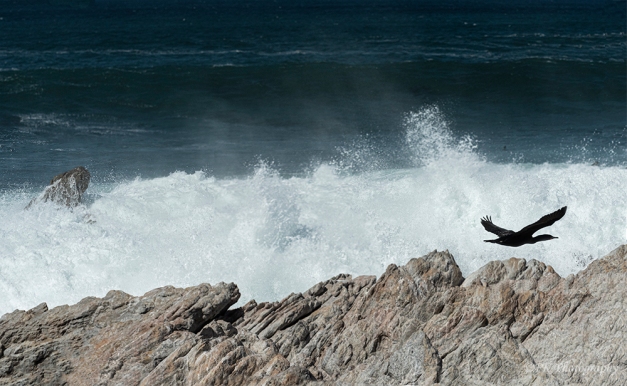 A solo cormorant flies across a rock face silhouetted by the churning surf below….

and three cormorants fly in a row farther offshore. 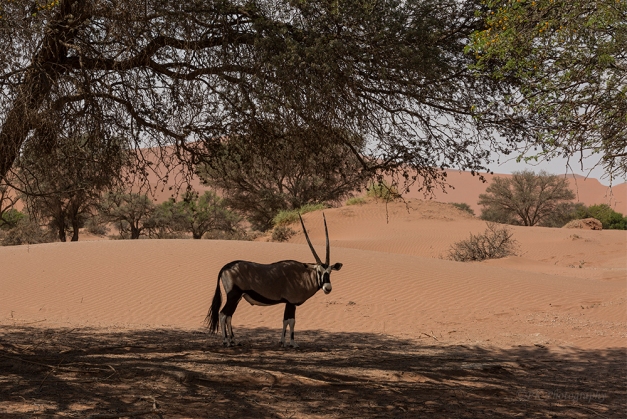 This oryx (also called a gemsbok) has found a good resting spot near the dunes of Sossusvlei, Namibia.  He is keeping an eye on me, but is reluctant to leave his comfortable place in the shade.

Elephants have soft pads on their feet rather than hooves and they walk quite silently for their size. They also have toenails, which get worn down because they walk a little bit forward on their tippy toes. 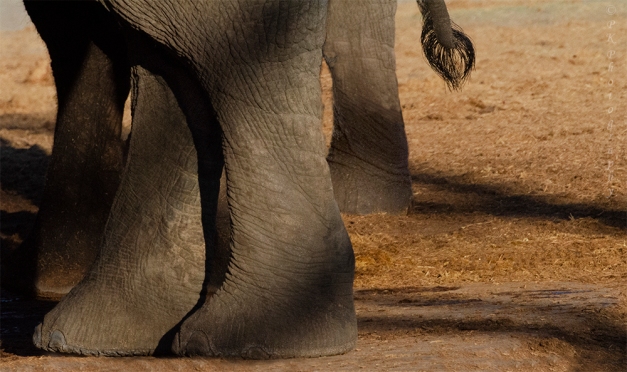 It is truly amazing to me that such a giant animal lumbers quietly around on soft, albeit tough, padded feet.

So many animals are great parents and elephant mothers are among the best that I have ever seen. Mother and baby stay close to each other and the young walk right by the mother’s side.

The young baby relies on its mother for nourishent and protection and is often nearly hidden by Mom’s silhouette.

The sitatunga is a rare, swamp-dwelling antelope, an animal I had never heard of. This one was crouching along the bank of an Okavango delta waterway in Botswana.

The wild dog was our African guide’s favorite animal and he told us we were lucky to see quite a few of this endangered animal while in Botswana. They usually hunt in packs like wolves. But we saw a male and female hunting together, possibly the start of new pack. The pair tried to capture a small antelope, but in this case was unsuccessful.

The beautiful ears are on high alert. 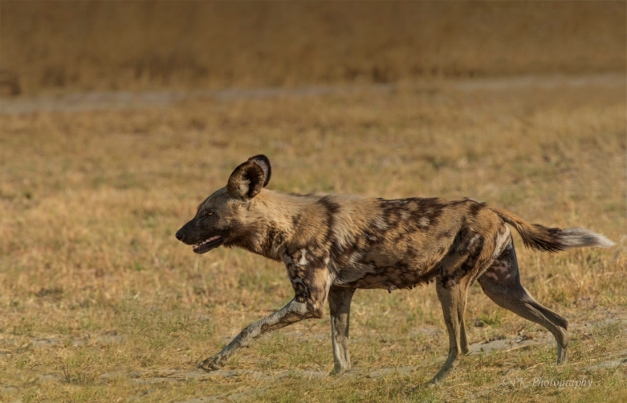 They are also call spotted wolves, and you can see why.

They blend beautifully with the savanna grasses.

We saw many lions…male and female, large and small prides, nursing mothers, cubs learning to eat the meat of a recent kill. They were often very close to our vehicle and as long as we stayed in the vehicle we were safe. However, our guide said if we got out of the vehicle, we might be eaten. I just had to ask! 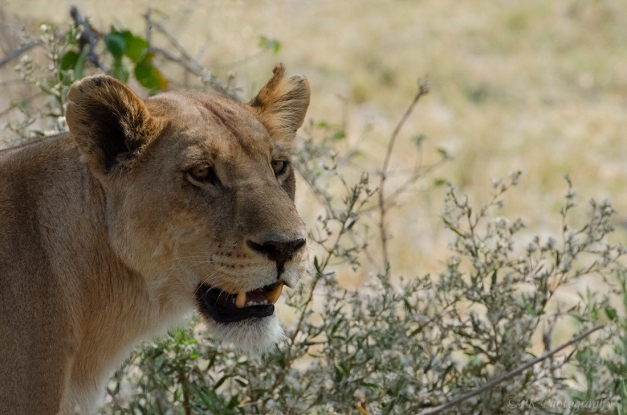 Mom is sticking pretty close to her cubs.

This girl is Queen of the Mound!

Elephants in the Okavango

Have you ever seen a wild elephant take a bath? I never thought I would see such a thing, but I saw quite a few enjoying baths in Botswana’s Okavango Delta, a vast inland river delta that floods and dries each year.

This is the first elephant we encountered on a five-hour boat trip to a lodge in the delta. After we showed up, he got out of the water. That was a difficult process and this ponderous giant seemed loathe to give up the bouyancy that the water provided. 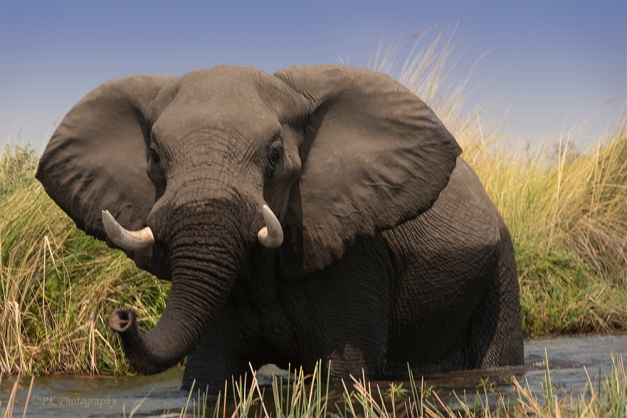 We passed a second elephant standing close to the bank. 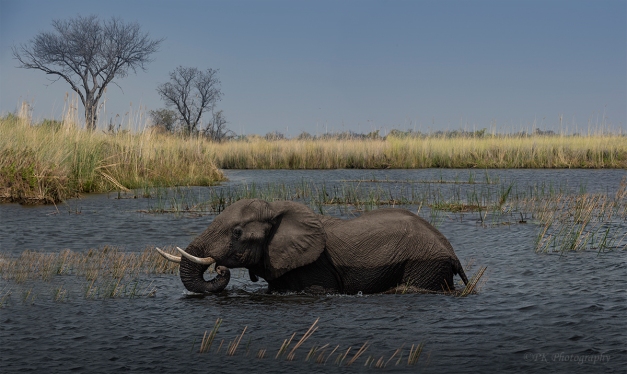 and quenching their thirst, which is easy this time of year.

Cape Buffalo are strong, massive, hulks living in sub-Saharan Africa.  Also called the African buffalo, they are known to be unpredictable and dangerous in encounters with humans and other animals. These imposing creatures have few predators.

They are bovines, generally found in clusters or in herds, but never domesticated.

Sometimes there are too many to count. 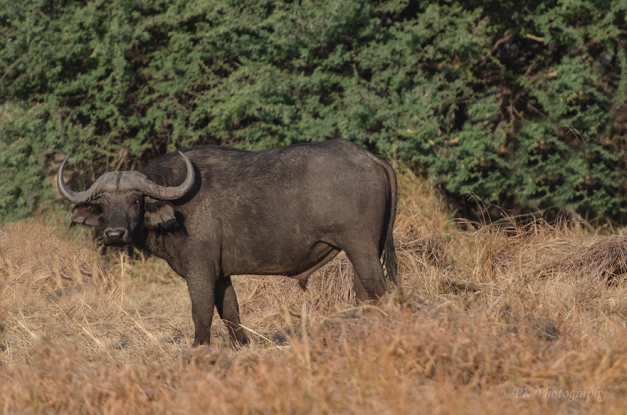 His look seems to say, “Don’t get too close or else.”